Piano Teams Up With True[x] to Combine Advertising and Paywalls

TechCrunch – Nov. 22, 2018 – Nearly every online publisher has launched or announced a paywall — but of course, even the ones that are successful won’t convince every reader, or even the majority of readers, to sign up. Now Piano and True[x] say they’ve found a more effective way to monetize the rest of the audience, without threatening crucial subscription revenue.

Piano is a company that’s built a range of publisher tools, including paywall and subscription management. True[X], meanwhile, is an adtech company that was acquired by 21st Century Fox a few years ago.

Piano’s global head of business development Jonas Rideout said the collaboration will allow publishers to present different messages to different audience members. This is something that Piano has already been working on, but by partnering with True[x], it can present readers with the option to (temporarily) circumvent the paywall by watching a premium video ad.

According to Rideout, this takes advantage of Piano’s “out-of-the-box segmentation,” which assesses reader loyalty based on things like how often they visit a site, where they’re coming from and how many pages they visit. It probably makes more sense to ask the most loyal readers to subscribe, since they’re the most likely to convert.

Meanwhile, there’s another subset of readers who may be interested in the content, but aren’t actually going to pay — at least, not yet. Those are the ones who will have the option to see an ad, so the publisher is still making money, and they’re also keeping the reader engaged in case they want to subscribe down the road.

“Maybe 1 to 3 percent of that audience is going to subscribe, but you’re worried about cooking your golden goose [by giving them a way to get around the paywall],” said Chris Shively, True[x]’s director of global business development. “Now you can actually provide that other 97 percent of the audience with a different experience. They’re getting to enjoy the product while you’re getting a significantly higher CPM.” 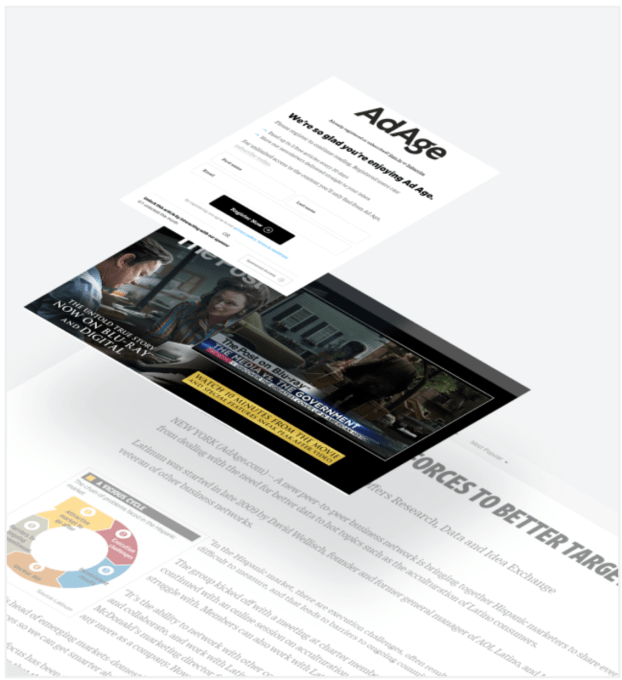 Shively declined to specify how well these ads monetize, except to say that they’re priced “significantly higher” than a standard display or video ad. He also said, “It’s very important to us that the user has a choice” — so even if you’re given the ad option, you can still choose to subscribe instead.

And to be clear, these ads aren’t an indefinite free pass. It’s a metered system, where the publisher can let the reader through the paywall a set number of times before they really do have to pay.

Piano and True[x] have already been testing this out with Ad Age, where they found that the visitors who were asked to view a video ad were significantly more likely to register later on. Among readers who watched the ad, there was a 17x increase in the current conversion rate, but even if you look at readers who were given the option and didn’t watch it, they were 3x more likely to register than those who were only presented with the registration option.

Rideout also noted that not every Piano publisher makes money through subscriptions (in fact, TechCrunch is a publisher that uses Piano for non-paywall purposes). So he said the team has been talking about “how else this could be applicable,” like helping publishers drive readers to sign up for giveaways or to provide some of their data.